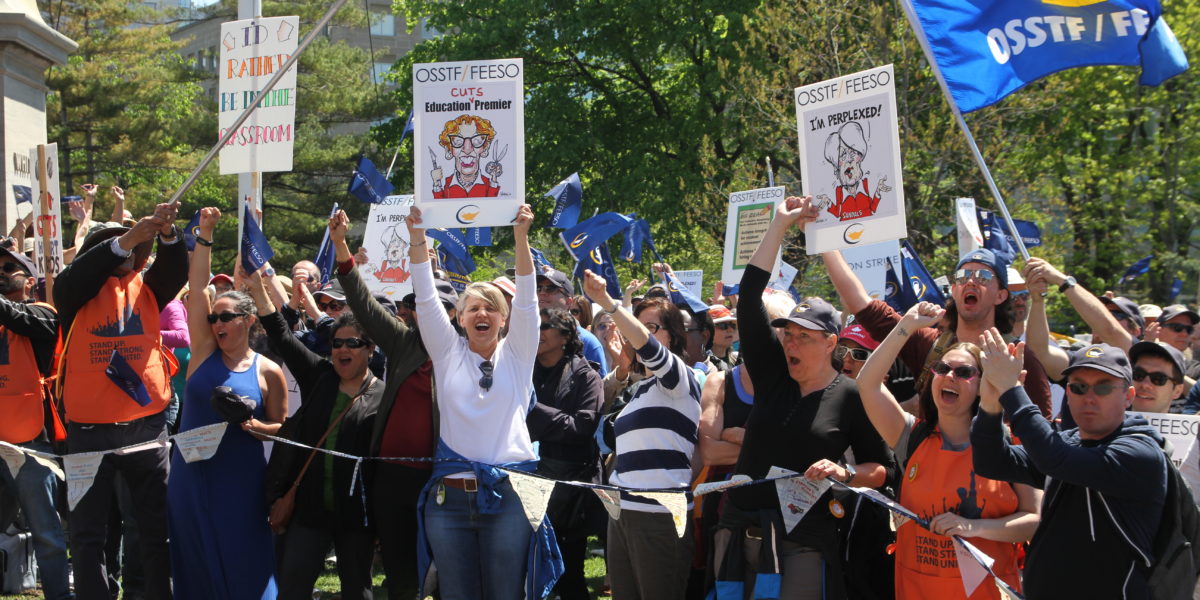 After nearly a year of negotiations, during which time we were without a collective agreement, the Provincial Executive of our union, Ontario Secondary School Teachers Federation (OSSTF), has reached a tentative agreement with the Liberal government.  As OSSTF members, we cannot vote in favour of this agreement and we urge our fellow members to vote no on September 16, when we will be asked to ratify it.

For three years, we have seen our incomes eroded by a legislated wage freeze, forced unpaid days off, and delayed grid movement.  The proposed agreement does not compensate for these lost wages. While conservative estimates generally put inflation at 2% a year, the price of food and, in Toronto, housing, have gone up much more rapidly.  A one-time 1% signing bonus does nothing to change the fact that we are being asked to accept a mere 1.5% raise after half a decade, a raise that would actually see the real value of our incomes eroded by roughly 10%.

Fending off OPSBA’s demands of strips to class caps and supervision language is not a victory. The lack of a strip is not a gain. We did not negotiate anything in this contract that addresses the steady attrition of staffing resources in schools. We should be demanding smaller class sizes and more guidance allocations. We should be demanding a change to the funding formula. This agreement does not bode well for support staff and their negotiations, as we desperately need more psychologists and social workers in our buildings, nor does it support CUPE and its attempt to stem the attrition in our main offices.

As teachers and education workers, we care about the learning conditions of our students. We believe schools should be well staffed, well maintained, and well supplied. We care that our students have the good facilities and manageable class sizes they need to learn properly.

What we reject are the arbitrary “zero-net” parameters that pit the needs of students against the living wages of the people who teach and support them.  Contrary to being a drain on resources, the people who staff the school are the most important resources.

As a female-dominated profession, we continue to have to fight the kinds of expectations that are often attached to women’s labour. Our society still to a large extent sees the taking care of children as women’s natural roles, not as jobs deserving of financial compensation. These kinds of cultural assumptions were only reinforced when our provincial leadership kept repeating publically during negotiations that salary was not a concern.

Teachers require several years of costly university training and certification, and many of us are struggling to pay off student loans while also trying to raise families of our own. Those who came before us fought hard over many years to ensure that our salaries were able to meet those professional needs and provide us with a wage that with experience and seniority is fair and commensurate with our level of training and education.  Yet this will change over the long-term if we accept the erosion of our income by refusing to demand basic cost-of-living increases.

The Liberals claim no new money and fiscal realities while they fund velodromes and give corporate welfare to profitable companies. Meanwhile, our schools fall apart. If we, such a large collection of workers, won’t take a stand against this madness, then who will?

While corporations sit on hoards of cash thanks to decades of generous and steady tax cuts, the rest of us are being asked to accept austerity. We refuse to continue to subsidize corporations that have sucked money from workers and from our public institutions in return for promises of jobs that they continue to cut and outsource rather than create.  We need to make different choices from the false ones imposed by the logic of “zero-net.”

That choice begins here. Vote no.