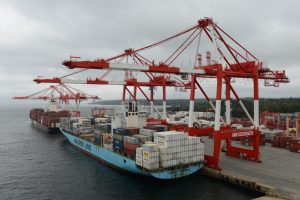 Some seafarers visiting the port of Halifax earn as little as $1.37 per hour, says Karl Risser, an inspector for the International Transport Workers Federation (ITF)

As an inspector, Risser, under some circumstances, is allowed to board ships to check working conditions among the crew. He asked that we do not identify the seafarer in question for fear that he become the subject of retaliation.

“This young man I  recently met, he makes just over $400 a month, and of that he sends home $330 to support his family. That leaves him with a couple of dollars to buy smokes or whatever he needs,” Risser tells the Nova Scotia Advocate.

And don’t think this is an exception, says Risser. Shipping companies are eager to hire staff from countries affected by conflict. This young man is from the Ukraine, and Risser is beginning to see more and more seafarers from Syria as well. And no matter how low the pay, hope for a better paying job sometime in the future is what stops them from complaining.

“These seafarers will be on board for 10 months on end. This is a bright young man, very sharp, just trying to support his family. Living on the promise of maybe becoming an officer and making some legit money some time in the distant future,“ says Risser.

Risser’s employer, the ITF, is an affiliation of transport worker unions that, among many other things, makes sure that the shipping industry is regulated effectively and workers are supported, regardless of their nationality or the flag of the ship.

But Risser cannot just board all vessels that visit Nova Scotia ports, only those that have a unionized crew or that have an agreeable owner are fair game.

The company that the young Ukrainian seafarer works for is German, but the vessel is flying a Cypriot flag. These flags of convenience allow owners to bypass the better minimum wage and working conditions that are common in the countries from where they do business.

“These low wages are part of an effort to knock down the shipping prices to get the goods to places like Walmart at the lowest possible price. Wages are the only thing you can cut. The ship is the ship, the cost of fuel is what it is,” says Risser. “It puts Canadian seafarers and others out of work because we can’t compete.”

“Even the ITF rates for international seafarers are far below our standards. But when I see even lower rates,  as low as $1.36 er hour, it really hits you in the guts, that and the fact that guy actually considers himself lucky. This is the ugly underbelly of the shipping industry.”

This was first published by the Nova Scotia Advocate