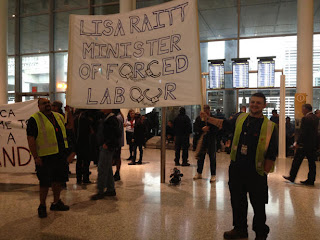 Air Canada suspended the three workers as Raitt called them “animals” in the process. Shortly thereafter, Air Canada around 150 ground crew began a wildcat strike and took to marching through Terminal 1 (domestic) chanting “Fire Lisa Raitt” and demanding the suspensions be lifted. By Friday morning, dozens of workers at Pearson and across Toronto joined the protest which had grown to over three hundred. More recent videos show a CUPE 966 Flying Squad bus at Terminal 1 and support from CAW workers as well.

The wildcat then spread to Pierre Trudeau airport in Montreal, Jean Lesage in Quebec City, and Vancouver International. In terms of disruption, National Post reports 77 cancelled flights at Pearson, 15 in Montreal and 4 in Quebec City. Leading Tory cabinet minister and President of the Treasury Board Tony Clement was held up on the tarmac at Halifax for two hours on Friday morning as well and when he arrived at Pearson in Friday morning he was heckled by workers.

Raitt couldn’t make up her mind about what to do. On the one hand, she appeared to backing out of the dispute stating that it was a matter between the workers and Air Canada, even though she was responsible for back-to-work legislation against unionized workers of a privately-owned company threatening a lock-out. Then she also made pretty clear threats stating that if the Industrial Relations Board declared the wildcat “illegal”, individual workers would fined $1000/day and the union $100,000/day.

Union reps from the International Association of Machinists and Aerospace Workers, representing ground crew, baggage handlers, and mechanics, also weighed-in, urging workers to go back to work. Whether this was to save face publicly given the financial threats of a CIRB ruling, or a more pernicious effort to curb rank-and-file militancy, is unclear at this point. 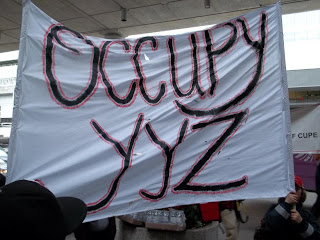 It appears that as of early afternoon this Friday – less than 24 hours after Raitt landed in Toronto – the wildcat is over. The three suspensions have become suspensions with pay. Workers have returned to work although apparently a handful are still out. Mainstream media is reporting that 37 workers were fired for the action and also immediately reinstated, but this is disputed by an on-the-ground report that they were merely disciplined.

As the wildcat seems to be coming to an end, Lisa Raitt’s riding office in Milton, Ontario has now been occupied and police are now on the scene. People have called in, filling her voicemail with angry comments and slow clapping to the point that the voicemail is now full.

Updates and links will be provided as more information emerges. I’ll also try to provide some preliminary analysis dealing with the context of the wildcat and the balance of forces between the federal state, employers (private and public), unions, and rank-and-file workers.

Most information is from online coverage in the Toronto Star, CBC and National Post, and a union organizer who got to Pearson on Friday and has contacts among the ground crew.