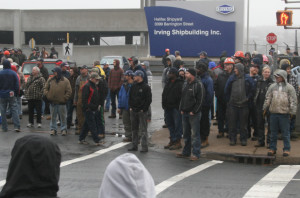 The tragic suicide by a worker with 38 years’ seniority at Halifax Shipyard on Wednesday, sparked a walk out of more than 300 shipyard workers on Thursday. First thing this morning, workers found out that on learning of their comrade’s death, workers on the previous night’s shift had refused to work. At about 8 am Thursday, the day shift, who had just arrived, downed tools and walked out.

While union leaders went to the Shipyard’s office to demand an end to management bullying and hounding employees, more than 300 workers and some supporters poured out of the yards and blocked traffic on Barrington Street at morning rush hour.  Management quickly decided to lower the flags at half-mast, and promised to look into the events that lead to the worker’s death.

Co-workers said that the deceased was a well-liked and conscientious worker, who was no troublemaker.  His foreman saw him doing something minor incorrectly and hassled him. The situation escalated and the man was given a 30-day suspension without pay.  “This close to Christmas, and suspending him with no pay? That’s wrong,” said one welder still outside the plant.
The welder also suggested that because the deceased man was an older worker near pensionable age, the Shipyard wanted to get rid of him.  A metal worker said, “Management thinks they are gods in there — that is the problem. This was the last straw for our co-worker.”

Two other workers said if management refuses to address the suspension of their co-worker, and commit to end management’s bullying, the workers will protest again Friday morning and even stay off the job.

Judy Haiven is an associate professor in the Management Dept. at the Sobey School of Business at Saint Mary’s University and a member of Solidarity Halifax.

This piece was originally published on the Halifax Media Co-op