Nearly a month has passed since Canada Post’s management announced, without warning to either the public or the Canadian Union of Postal Workers, that home delivery for five million Canadians would be cut, at least 8,000 jobs eliminated, and service costs increased.

As many have pointed out, including the Canadian Union of Postal Workers, Canada Post’s reasons for worse service at a higher cost are bogus, based around half-truths, fabrications and a pro-privatization ideology. An NDP-sponsored petition drive is gathering momentum and CUPW is providing materials for Canadians to take action. Within the coming week, the Support Postal Workers website will be compiling a lot of this information into one-page info flyers for distribution, canvassing and postering.

In the meantime, postal workers and the public are already taking action as wider coordinated campaigns take time to get off the ground.

Lisa Raitt, you’ve got mail!
Gathering 12,000 protest letters in one week, postal workers delivered them to federal Minister of Transport Lisa Raitt’s riding office in Milton, Ontario. On hand was the Canadian Union of Postal Workers inflated blue elephant “Banking on a future for Canada Post” referencing the union’s sound proposal for postal banking; a proposal that would save and improve Canada Post services.

PEI postal workers have been gathering petition signatures and building support by campaigning at the Charlottetown farmers market and caroling from door-to-door in Summerside.

Which side are they on?
In Yorkton, Saskatchewan, postal workers attended the city council meeting to make the case for municipal politicians to oppose the cuts, cost increases and layoffs. Despite an estimated 65 to 75 percent of Yorkton’s residents facing the loss of home delivery, the city council failed to act.

By comparison, the mayor of St. John’s, Dennis O’Keefe, did not wait for consultations to do the right thing. Alongside postal workers, he came out publicly in opposition to the cuts:

“If I was in a business and I determined I was going to reduce my service to my customers and I was going to increase the cost by 60 per cent, then I’m certainly not building up a business. What I’m doing is preparing for its demise.“

St. John’s then witnessed a post office outlet fail to open on December 24 due to management incompetence. Management did not schedule sufficient staff for one of the busiest mail days of the year. CUPW Local 126 president Mike McDonald asked the simple question “If you know Christmas is coming and you know that you need the extra staff, why wouldn’t you make them available?”

“Once the service is so bad Canadians won’t care when their post office is dismantled and sold off so that a few wealthy investors can get rich off the sale of a public asset.” 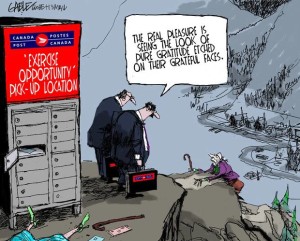 Elsewhere, such as Amherstburg, Oshawa and North Bay in Ontario, local CUPW leaders have made sure their voices are heard in the local media. In Fort Frances, Northern Ontario, postal workers have also spoken out with the support of local NDP MP John Rafferty who said to the press:

“It’s the same thing with CBC and other things this government does—they starve it to the point where they say, ‘Look how awful this is! Let’s get rid of it.’ But really, the problem is theirs all along.”

It’s friggin’ slippery outside, eh?
Echoing Rafferty’s other concerns about seniors, Comox, BC, postal workers and seniors groups have warned of the lack of security and safety around community mailboxes.

The ice storms which hit central and eastern Canada makes the safety concerns for seniors and the disabled indisputable. Canada Post and the federal Tory government are showing no concern for public health and safety.

In the prairies, where brutal winter weather is even more common, Winnipeg senior Janice Lorback observed,

“Having to make your way to a postal box in –29 C weather with snow on the ground is incredibly difficult even to fully-abled people. Look outside today. There’s nobody walking.”

“You could be expanding into grocery delivery, prescription delivery, a whole bunch of things. You go to every household every day, the possibilities are endless…

“And with an aging population and rising transportation costs in all areas of transportation, I think having a delivery service that’s public could be key in the future and something that we should protect.”

These views of seniors and postal workers are the opposite of Canada Post CEO Deepak Chopra. Chopra had the gall to tell Canadians at an emergency parliamentary committee meeting that seniors would welcome the exercise. It is no wonder Ottawa-Centre NDP MP Paul Dewar tore a strip off the smug, heartless CEO.

We can do this
The busiest month of mail delivery is now over. With a December poll showing a 58% majority opposing the cuts, postal workers, seniors, local politicians and the wider public are already moving into action. But public opinion doesn’t matter to Chopra and pro-privatization governments. In 2013, two-thirds of Britons opposed Royal Mail’s privatization but in the absence of a public campaign and labour action by postal workers, it was sold off on the cheap and bought up by the wealthy, including a number of millionaires in the ruling British Tory government which oversaw the privatization. We should take heed of this grim lesson.

The 58% majority isn’t big enough, and that majority needs to be mobilized beyond passive actions like online activity. The campaign needs coordination, it needs strategy, it needs good old-fashioned door-to-door organizing. The immediate outcry and actions documented above won’t last forever and the fight is going to need a conscious effort to get back off the ground after the holidays. But we have been provided many examples of what we can do: protests at Tory riding offices, speaking with the local media, attending municipal government meetings to seek official support, and press conferences.

Let’s build on this and win. We can do this.