People filled the streets in Toronto north of the Ministry of Labour, marching to Queen’s Park, on June 16. Participants demanded that the incoming Doug Ford government respect the recent improvements to labour laws in Ontario. This includes the planned raise to a $15/hour minimum wage, which Ford said he would cancel if he were elected. The rally was organized principally by the Fight for $15 and Fairness and the Ontario Federation of Labour. 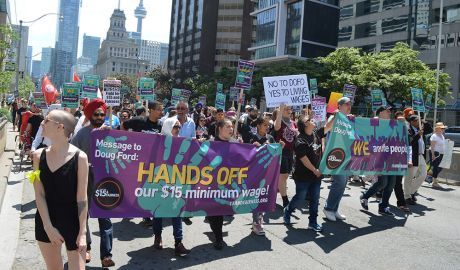 The coalition of people that turned out included healthcare advocacy organizations, decent work advocates, the Ontario Network of Injured Workers, climate justice organizations, the Ontario Coalition Against Poverty, Latin American, migrant workers, and Asian solidarity organizations, students and educators, contingents from many unions and labour councils, and people from all walks of life from across Ontario. The chant, “who’s streets? Our streets!” rang out dozens of times without irony: the entire main avenue of University was shut down for several blocks. The rally hosted powerful performances in the street by Torontonian hip hop artists Mohammad Ali (The Socialist Vocalist), reaLije, Masta Inferno, and Afro-Brazilian percussion troupe Baque De Bamba.

Speakers at the rally included Black Lives Matter – Toronto co-founder Sandy Hudson, author and investigative journalist Naomi Klein, Dr. Ritika Goel from the Decent Work and Health Network, and Chair of the Ontario Sikhs and Gurdwara Council Gobinder Singh Randhawa. Klein’s work has focused on the ways that reactionary forces take advantage of the fissures and inevitable disasters in a capitalist system, whether it’s Latin America, New Orleans, Iraq, Puerto Rico, or now Ontario. Klein warned that, “police are going to get even more heavy weaponry and even greater powers that they are going to direct at the very people hit hardest by these policies, as pain, poverty, and exclusion are further criminalized.”

This warning was partially born out two days later, with Doug Ford promising on Monday morning that public service hiring will be frozen, except for essential services. This allows the PCs to spend as much as they like on bloated police forces while public services stretch to their limits and collapse. This pivot is chilling. It is not surprising that the PCs have taken this position, as it allows their government to respond to unrest by sicking the police on people. Austerity regimes – including the disastrous Mike Harris PC government in Ontario – take viciously from the poor to further enrich the ill-gotten gains of the wealthiest in society. Ford and his party are now positioned to do the bidding of wealth and power.

The Rally for Decent Work represents a vocal rejection of this agenda. A must-read RankandFile.ca article published in the wake of the election lays out a roadmap for resistance. “We can’t substitute small numbers for a larger working-class effort to stop Ford. This means we need campaigns that can speak to people on issues and build their confidence and capacity.” As in the Harris years, it will require a mass coalition to be built and regularly mobilized.

Some of Tories’ policies may not be unpopular, such as their frat boy promise to bring back $1 beers. But a huge slew of them will be unpopular out of the gate, including a cancellation of the $15 minimum wage if they follow through. If experts and activists can effectively communicate how Ford’s cuts will harm them, a united front can be built that opposes them at every turn. A near-future exists where PC MPPs are too afraid of their own constituent questions to advocate their party’s policies, but this will only happen if regular organizing begins immediately and is consistent.

After sustained pressure from grassroots groups and the $15 and Fairness campaign, the Ontario Liberal government implemented Bill 148 in the spring of 2017. The bill included equal pay provisions, new regulations for temp agency liability, paid emergency leave, and a $14/hr minimum wage with a scheduled increase to $15 in 2019. This was after the Liberals had explicitly stated just a year prior that the labour laws being reviewed for change would exclude any increase to the minimum wage. It is clear that the wildly unpopular, strike-breaking, privatizing Liberals felt they had to include many of the demands of the $15 and Fairness campaign to stand any chance of re-election. Sadly for Ontarians, the Liberals timed the implementation of $15 and fair scheduling provisions for January 2019, putting the reforms in jeopardy for the Liberal Party’s cynical electoral dreams.

It didn’t work. Doug Ford won and promised early on in the campaign from a podium that the $15 wage would be cancelled. But he did not campaign on this promise, and has not even mention this position since. Fully 40% of conservative voters in Ontario support the $15 minimum wage, and so do 60% of small businesses. As well, 60% of voters voted for candidates that support the new labour laws (or improvements to them). Second place PC leadership candidate Christine Elliott however did say on CBC Metro Morning (June 5th) that on top of freezing the minimum wage, the PCs intend to roll back other aspects Bill 148. But nothing is set in stone.

15 and Fairness and the growing coalition

Elections are not the whole of politics. Elections exist within the political realm, but voting is perhaps the lowest level of political engagement possible in our society. Knowing this, a Doug Ford majority is not a call to despair, it is a call to action. Already there have been public meetings set up by the Fight for $15 and Fairness across the province to prepare for the struggles to come.

As Sandy Hudson made clear on a recent episode of Sandy and Nora Talk Politics and reinforced at the rally, organized labour has a huge role to play (or not play) in this era. Labour has resources, locations, people, and mobilization capacity that simply cannot be replicated in short term by cash strapped activists or their organizations. For Ford’s government to be effectively countered, labour activists need to shake their labour councils and local leaders by the ankles until the fight comes out in them. Labour and organizations allied with this coalition need to begin training activists and organizers immediately.

Doug Ford’s austerity regime is not going to be stalled or defeated with clever adjustments to the rules of our liberal democracy, nor by the courts, whom we have seen are not constantly effective bulwarks against far right governments. The key here is not to get hung up on culture war nonsense (terrain ripe for far right advances and continued victories) but to actually organize towards a more just society. The sensationalist statements that will come from Ford and his cronies are nothing to get hung up on. They provide comic fodder and catharsis for those who wish to look down on admittedly silly politicians, but they build no power, and are therefore a distraction at best.

And of course, not all MPP-elects in the province oppose the labour reforms. There are dozens of candidates who signed the $15 and Fairness pledge on the campaign website in the weeks leading up to the June 7th election. Every major party had candidates who signed except the PCs. NDP leader Andrea Horwath has also not yet signed the $15 and Fairness pledge, unlike many in her caucus. There were several politicians in attendance at the Rally for Decent Work, including NDP MPP-elects Suze Morrison, Jill Andrew, Bhutila Karpoche, Jessica Bell, Marit Stiles, Rima Berns-McGown, Gurratan Singh, and Chris Glover and Ward 11 city council candidate Chiara Padovani.

What all of this describes is a changing political climate that is in fact in favour of progress. These politicians feel that they have to reach out and sign a public statement in allegiance to a grassroots campaign for wage increases and decent work. Even a year ago, and throughout the Wynne-McGuinty tenure, this was unheard of. Nevertheless, people cannot rest on the hope that a fiery speech from a new NDP MPP will embarrass the PC government (though that will surely be fun to watch). Building on this favourable mood will require self-activity and regular mobilization across Ontario. This work has already begun.

This article first appeared at socialist.ca