Employees at the Rainforest Café in Niagara Falls began striking on Sunday after voting overwhelmingly to reject the employer’s latest offer. The 95 staff members, including servers, bartenders and hostesses, are represented by Workers United Local 2347.

The workers are looking for their first collective agreement after forming a union in April 2018. The organizing drive was in response to management’s decision to increase the tip out percentage for servers once the minimum wage went up in January 2018, thereby diminishing the effects of higher pay.

The Rainforest Café is part of an “entertainment resort” owned by Canadian Niagara Hotels, which includes four hotels in the vicinity.

An abrupt end to negotiations

Mike Ward, Workers United Canada representative, says that after a marathon bargaining session on March 22, the employer offered a contract that was largely acceptable but didn’t address all of the workers’ concerns.

One of the main sticking points was the 4.5 per cent tip out percentage levied on net sales, resulting in servers having to pay out of pocket in the event of a low tip. 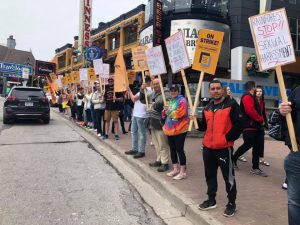 However, after further negotiations, the employer conceded the inclusion of protection language in the contract, which would preclude servers from spending out of pocket. That should have clinched the deal. And it seemed that way when the employer sent a revised final contract on March 25.

After presenting the revised contract to the membership Ward said, “we came up with a handful of items that we wanted clarification on. And so I [emailed] that off to the employer before we organized the ratification meeting, and a bunch of them were answered that night but three questions were left unanswered.”

But strangely, the employer responded on April 3 to say that they had reconsidered and would be rescinding their revised offer. Instead, the workers were given the option of voting for the original deal from March 22. Naturally, the employees rejected that offer and chose to strike.

Ward says that the employer may have been drawing out negotiations to get to April 10, which would mark the anniversary of the formation of the union. According to Ontario’s labour laws, if a collective agreement is not signed within the union’s first year, a decertification vote can be organized by the workers.

“And so I think they were kind of manipulating us a bit in hopes that they could get to April 10, because they did do a mass hiring about a month ago,” he said. “And they said, ‘Oh we are getting ready for the busy season,’ but never before had they hired 30 people in a two-day period.”

The new hires are among some of the workers who have crossed the picket line, including a server who has been accused of sexually assaulting three of his co-workers. 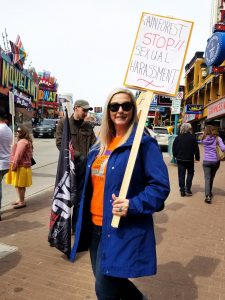 According to the union, one of the reasons the workforce became so determined to take a stand is the management’s recent mishandling of sexual misconduct by a male employee against three female co-workers.

Alice, whose real name is being concealed to protect her identity, says the accused massaged a co-worker’s shoulders and pressed himself against her as she stood at the bar, while also touching both of them inappropriately on multiple occasions.

In response, the management asked her if she would be willing to accept his apology since he was “very shaken up and upset,” and “can’t sleep at night.”

“[I said to the assistant manager], ‘People make mistakes, it happens. If he can apologize, then I can accept his apology but, honestly I’m just a little bit confused because I’ve seen other people get fired for much lesser things,’” Alice said.

Alice says she felt very uneasy about the conversation, especially when she was told that servers could be fired for picking French fries from a plate while passing through the kitchen.

The management arranged a meeting between Alice and the accused where the latter apologized. But Alice says it seemed like he was apologizing for the sake of it and not because he felt he had done something wrong. She also didn’t feel comfortable with the management’s attitude.

“It seemed like the concern wasn’t what happened to me and the other girl but what would happen to him if we went through with the accusation [and filed a complaint],” she said.