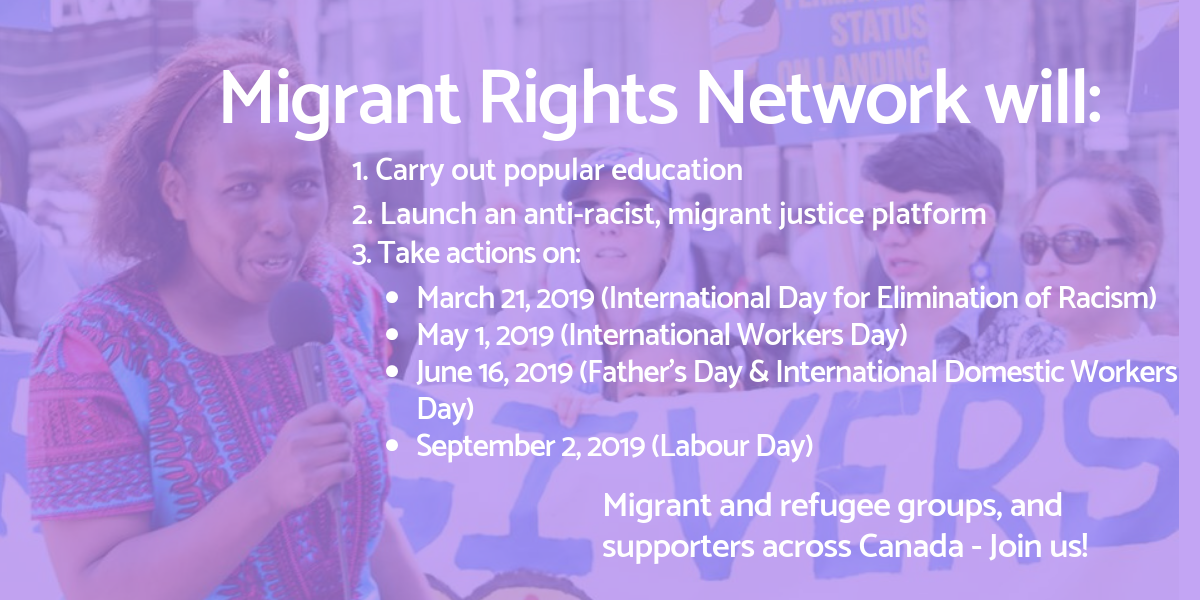 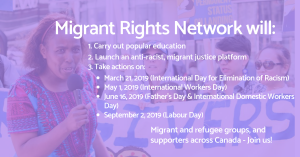 Thirty-five organizations across Canada coalesced to form the Migrant Rights Network on December 18, the International Migrants Day. The alliance aims to fight for the rights of migrants and combat the rising tide of racism in the country.

Unifor, Migrant Resource Centre Canada and No One is Illegal are among the members of the coalition, which is predominantly composed of migrants’ rights groups and labour organizations.

An anti-racist platform and ‘popular education’

Syed Hussan, coordinator for the Migrant Workers Alliance for Change, said the network will be launching a platform ahead of the 2019 federal elections on the principles of anti-capitalism, anti-racism and migrant justice.

“We will give a clear, coherent, strong message to the political parties that we’ll not be allowing them to further manipulate and divide us as a way to win votes,” Hussan said, citing the increasingly nativist tone of the Conservative party and the far-right.

He said the rhetoric of the political right against refugees has had some resonance within the migrant community, which will be addressed through popular education.

The need for solidarity among the working class and migrants will be a crucial message to address the divisive rhetoric about immigration, which has been pitting different types of migrants against each other, said Hussan.

Hussan noted that the education will take place among self-organized working class and migrant communities through various forums including community centres, membership meetings and the establishment of local knowledge hubs.

“We’d like poor and working class people particularly to see that it’s not immigrants and refugees that are the problem,” Hussan said. “We are all facing common conditions of being impoverished, of not being able to feed our children, living from pay cheque to pay cheque, and it’s the bosses’ fault. It’s not the fault of the immigrants and refugees.”

Hussan said the migrant community is divided by the immigration categories and streams that privilege some groups more than others, but had to mobilize on the basis on their common humanity.

He said while the immigration debate is often focused on refugees, Canada has a revolving door of marginalized people on temporary status.

“[It’s the] permanent underclass of people denied rights: labour mobility, access to employment insurance, pensions, health services, etcetera – all of the things they may pay for,” he said.

The educational initiative will also engage labour unions, which will be asked to pass on the message to locals as well as their provincial and national bodies.

Byron Cruz, member of Sanctuary Health in Vancouver, said that the network will address divisions within the labour movement.

“It’s important to acknowledge the existence of the [undocumented] labour force because historically undocumented workers have been marginalized,” he said. “When we talk to unions, they say sometimes, ‘Well, Canadian jobs for Canadian people.’”

“But I feel there are new spaces in terms of having these conversations,” he added.

Aside from Unifor, labour representation in the alliance includes Fight for $15 and Fairness Ontario and Immigrant Workers Centre, Montreal.

The network is calling for self-organized actions by allies on four days of action in 2019 to coordinate a massive show of solidarity across the country:

“We are calling for the Labour Day parade that will take place around the country to be themed around anti-racism and migrant justice,” Hussan said, adding that the detailed plans will be finalized closer to each date.