Demise of Sears Canada should be catalyst for change: McQuaig
Linda McQuaig, The Toronto Star
October 26 2017

Suddenly jobless after two decades as a sales manager for now-defunct Sears Canada, Rose Dalessandro found herself unable to pay for dental appointments for her two children. She could blame her financial difficulties and the demise of the once-mighty Canadian retail giant on the usual suspects — poor management, globalization, the rise of internet shopping.

But it might be more accurate to blame Eddie Lampert, the billionaire U.S. financier who is the company’s largest shareholder as chairman of Chicago-based Sears Holding Corp. 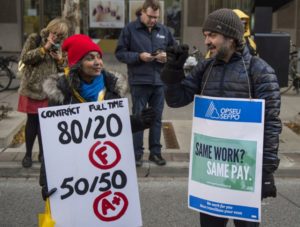 We are students at four Ontario colleges and our faculty are on strike. We are keen to get back to class, but we do not want to return to our studies until fairness is achieved for college faculty. We understand that our instructors’ working conditions impact the quality of our education.

In this strike, we are not neutral. We support our faculty.

We know the reality of precarious work. Many students work multiple part-time jobs to get by and to pay our tuition fees. We need fair scheduling rules to plan around our class schedules and exams.

Day 10 of the Ontario college strike started with a rally outside the office of Deb Matthews, the advanced education minister, in downtown Toronto.

A section of Bay Street, south of Wellesley Street, was shut down Wednesday morning by hundreds of teachers and union supporters marching and holding signs that called for more academic freedom and a better plan for part-time faculty.

“We just want the two sides to get talking as soon as possible,” said John Kneller, who teaches film and television production at Sheridan College.

The world’s super-rich hold the greatest concentration of wealth since the US Gilded Age at the turn of the 20th century, when families like the Carnegies, Rockefellers and Vanderbilts controlled vast fortunes.

Billionaires increased their combined global wealth by almost a fifth last year to a record $6tn (£4.5tn) – more than twice the GDP of the UK. There are now 1,542 dollar billionaires across the world, after 145 multi-millionaires saw their wealth tick over into nine-zero fortunes last year, according to the UBS / PwC Billionaires report.

About half of people working at heights in suburban Halifax this year weren’t using proper fall protection, according to compliance inspections by the Nova Scotia Department of Labour.

Scott Nauss, senior director of inspection and compliance at the department told Metro that in 2016, fall protection compliance – whether people were wearing properly anchored harnesses while working at heights – was 75 per cent. In 2017, that number fell to 70 per cent.

Nauss said the drop is due to what he called “pockets of non-compliance” in suburban HRM – areas like Spryfield, Bedford, Hammonds Plains, Sackville, and Fall River.

The retired General Electric worker, who believes his cancer was caused by the two decades he spent working among toxic chemicals in the company’s Peterborough plant, received a call late last week saying his WSIB claim is being reviewed.

But the roller-coaster ride he’s been on since the 1990s — having his claim turned down, being rejected again on appeal, then informed he would get a review, only to be told no because of the previous rejection — means the 71-year-old is still wary.

Unions negotiating a first contract would have the right to arbitration instead of having to give up or go on strike under a proposed amendment to the Industrial Relations Act.

Employees already have the right to form unions but not to arbitration if they can’t reach a first contract with management. Arbitration has only been available to unions renegotiating existing contracts.

But under the proposed changes, a union and employer would each have the right to ask for arbitration if a dispute reached an impasse.

Custodians in SD61 were told earlier this month to cut back on vacuuming area rugs in elementary school classrooms. In many schools the area rugs were being vacuumed every day, but the new order from the Director of Facilities stated that carpets in Kindergarten (K) and Grade 1 classes should be vacuumed only twice a week and Grade 2 – 5 carpets should not be vacuumed at all.

Custodians reported the change to teachers, who then expressed health and safety concerns to Jason Gammon, the president of the Greater Victoria Teachers’ Association (GVTA).

The cancellation of a pay increase for private security guards has workers in malls, apartments and businesses across Manitoba worried the province could move to repeal labour rules that set their wages above the provincial minimum.

Security guards rallied on the steps of the legislative building Tuesday to protest after the province cancelled a $0.75 increase for guards that was supposed to go into effect on Oct. 1.

The City has reached a tentative offer to keep the buses rolling.

“The union’s negotiating committee will be endorsing the agreement. It will be presented to the members on Sunday and voted on Wednesday (Nov. 1),” says Tyler Burns, president of the local chapter of the transit union.

A handful of labour leaders launched a campaign at Toronto’s Union Station on Tuesday morning to stop what they say is the privatization of public transit projects.

The campaign, Keep Transit Public, includes a website and an online petition directed in part at Metrolinx, the provincial transit agency.

Organized in part by the Amalgamated Transit Union, which represents transit workers, the campaign aims to stop transit from being built as public-private partnerships, in which public services are delivered by private, profit-making consortiums.