The campaign, “Keep Transit Public,” was launched on June 15 by Amalgamated Transit Union (ATU) Local 107, the union representing drivers, maintenance workers, and support staff at the Hamilton Street Railway (HSR), and is being supported by a broad coalition of progressive forces, including the Hamilton and District Labour Council, individual unions, and local NDP MPPs (including Ontario NDP leader Andrea Horwath, who is the MPP for Hamilton Centre).

Transit workers and their allies are fighting back against the winds of privatization that have been blowing from the office of Kathleen Wynne, and are demanding that Hamilton City Council stand with them to defend high quality public transportation in the interests of Hamiltonians rather than in the interests of Wynne’s friends on Bay Street.

In her 2015 budget, Wynne announced $1 billion in funding for the LRT project as part of her government’s Moving Ontario Forward plan. This came eight years after then-Premier Dalton McGuinty first announced $17.5 billion for transit projects across the Greater Toronto and Hamilton area, and a specific promise to build Light Rail in Hamilton.

Between 2007 and now, there has been plenty of debate, research, and advocacy from both pro and anti-LRT groups on the merits of the proposed project, and on the best use of $1 billion dollars for the city of Hamilton.

By late April of 2017, Hamilton City Council finally gave the LRT project the green light when it approved an updated environmental assessment. Construction is set to begin in 2019, and it is set to be operational by 2024. The next step is to decide who will build it. And that’s where the latest controversy lies.

From public to private hands

Metrolinx, the crown agency of the government of Ontario that oversees public transportation projects in the Golden Horseshoe area, has decided that it would only accept bids for the LRT contract from companies that can finance, design, build, operate, and maintain (FDBOM) the entire project.

By bundling all of these different components into one FDBOM contract, Metrolinx has excluded the HSR from the process altogether, since they would only be able to provide two of the five components: operate and maintain.

FDBOM is one of the most common forms of public-private partnerships (P3s), and is seen by many as a way to privatize public assets. As the Canadian Union of Public Employees note in their guide to P3s, “While ownership is public” in the FDBOM model, “there is an unprecedented degree of private involvement in and control of public services and assets.“

For Eric Tuck, President of ATU Local 107, this would be a dangerous move for the city’s transportation system.

“The citizens of Hamilton own and run the HSR as a non-for-profit service to the public,” says Tuck. “Once you bring in private companies, their only interest is in profit. They have three ways they can make money: driving down wages, hiking fares or reducing quality of service or maintenance.”

“We think the public will be better served by keeping all Hamilton’s transit under public ownership and operation,” he adds.

Since its launch in June, the Keep Transit Public campaign has been gathering signatures on its petitions, raising public awareness, and putting pressure on Hamilton’s city councillors to endorse a motion that would ask Metrolinx to keep the HSR as the operator and maintenance provider for the new  LRT line.

A motion to this effect was brought forward by Ward 3 City Councillor Matthew Green on July 10, but has been rescheduled until August 9.

“I strongly believe in our HSR and the ATU Sisters and Brothers who have served our city for well over 100 years,” said Green in a statement on his website. “I also believe strongly that the HSR should be given the opportunity to operate and maintain Hamilton’s LRT system.”

Green has been a long-time advocate of the LRT project, and is a consistent ally of the labour movement at City Hall.

“Public transit is a public service and Metrolinx’s current process only provides for bids in a privatized system. With this motion I’m looking to include options that our public system stays public for everyone,” said Green.

However, while the labour movement has been strong supporters of the LRT project, not all LRT supporters have been getting behind labour. Indeed, some supporters of privatization have been using concerns for administrative efficiency to avoid addressing the dangers raised by ATU Local 107.

As one recent article puts it, “many LRT supporters fear an outcome in which LRT ends up under-funded, under-staffed, under-serviced and mismanaged, its vehicles blanketed in opaque vinyl ad-wraps and their interiors festooned with PSAs for lead water pipes and sexually transmitted infectious diseases.”

Putting the classist hang-up over using public transit for public health announcements to one side, their core concern is the city’s poor track-record on funding public transit, and they worry that transit may continue to be underfunded if left under the City’s control.

“Don’t trust the City? Then you sure don’t want to trust the private companies to do work that the HSR already does very well and very efficiently,” says Tuck. “Privatization means a loss of local control and all accountability. Private operators have only the shareholders to answer to and return on investment is paramount. Public transit is not profitable, it’s a public service.”

“They love telling us how our municipal governments are incompetent and that the private sector does it better. Except, they don’t. Time and time again this has been proven.”

Tuck points to Hamilton’s decision to privatize water and sewage treatment in 1995, which led to 182 million litres of waste being poured into the Hamilton Harbor and cost the city $2.5 million to clean up.

“Huge job loses, millions of litres of water spills, hundreds of homes flooded with raw sewage,” explains Tuck. “And costs went up, not down. It was so bad that in 2004, Hamilton brought it back into the public sector.”

For Tuck, the only to ensure the strength and adequacy of our public services is to get organized. He encourages residents to get engaged in the political process and to hold city council to account, rather than buying into the “the cynicism of the privatization evangelists.” 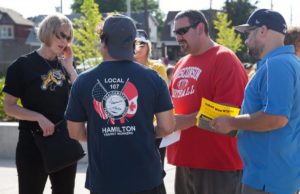 Hamilton City Council’s General Issues Committee will vote on the motion on August 9. From now until then, Keep Transit Public encourages supporters to sign and share the petition available on their website, and to make calls to their city councillors encouraging them to vote in favour of Councillor Green’s motion.

But this fight is one among many. From CUPE Ontario’s “Keep Hydro Public” to OPSEU’s “We Own It” campaign, the labour movement in Ontario is pushing back against the myth that handing over our public services to the private sector will lead to either higher quality or greater efficiency. ATU Local 107’s fight is the latest campaign taking aim at Wynne’s agenda of privatizing public assets and undermining the integrity of our public services.

Transit workers in Hamilton have stepped up to say that our transit system is not for sale, and are drawing battle lines between services that serve private interests and services that serve the public good. A victory in Hamilton will be a major blow to Wynne and her friends on Bay Street, and that’s why it deserves your support.

A rally will be held in support of the LRT motion put forward by Matthew Green on Wednesday, August 9 at 8:00am in front of Hamilton City Hall. You can RSVP to the Facebook event here: https://www.facebook.com/events/1400233476698698/. For more information on the campaign and to sign the petition, you can visit http://keeptransitpublic.ca.