Unions know how to negotiate contracts with unfair and greedy employers, but how do they engage their own members? In order to remain relevant in 2015 and beyond, the labour movement must connect meaningfully with their rank-and-file members and build a new social contract with them, all while educating the public. 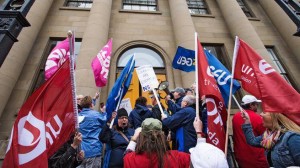 A social contract is usually an implicit consensus among the members of an organization or between the rank-and-file and the elected officials defining and limiting the terms of engagement, and these terms have changed over time in the labour movement.

How do we match our rhetoric of social justice and progressive values with action amongst the membership? How do we find out the direction our union members want to see the labour movement take?

Very few unions have membership engagement officers with a focus on collaborating with and learning from those they represent. Do the structures of unions inherently impede engagement with and amongst the rank-and-file? Is it time to have conversations about the way we conduct business with our members?

These are the kinds of questions we need to ask everyone who is a union member in order to create an action plan and build our base. In order to make radical and true change, the labour movement must work towards authentic membership engagement towards meaningful transformation.

Since 2000, Canadians have experienced a massive technological change, resulting in a shift of how we interact with each other. We experienced the rise of social media, so instead of just reading the news, we are now engaging with the stories. Instead of watching videos alone in our homes, we are sharing cute cat videos and making our own.

During this time the Internet became part of our everyday landscape, much like cars, airplanes, and elevators. This shift is less about consumption and more about participation.

The labour movement is halfway stuck in the consumption era. We see a top-down approach in many labour organizations, where leaders tell the members what to think, how to vote, and why it’s best to keep things status quo. There is very little room made for engagement with members.

Some unions may not see the importance of listening to and learning from members and this can be a fatal mistake, as we can never assume that we know best for those we represent unless we ask what they need from us. This is especially true for equity seeking members who are not proportionally represented in elected leadership.

CUPE Ontario has taken the lead by creating space for membership engagement with the Stand Up For Fairness model of membership connection. This campaign trains frontline members to organize one-on-one conversations with their members, with a way to track the conversation and follow up if needed.

Members then sign a pledge card stating that they have discussed the gains made through bargaining and how these improvements benefit all Canadians. This pledge reassures that every member can help protect all of our rights, unionized or non-unionized, by getting involved and discussing fairness.

This model of engagement helps non-active members to understand that it’s not “the” union but “our” union.

Some CUPE locals have criticized the Stand Up For Fairness campaign on the convention floor and at local meetings, but those who embrace this model are seeing a great increase in activism and commitment. One huge example of this is CUPE 3902, University of Toronto Teaching Assistants, who have followed the fairness model of local one-on-one conversations.

After a jam-packed and raucous meeting, 1,000 members of CUPE 3902 decisively rejected a motion to send a tentative agreement to ratification vote, choosing instead to fight for fairness on the picket line. These members felt empowered to stand up for their rights and had already had the important conversations with their leadership and each other regarding support, values, and goals through the Stand Up For Fairness engagement model.

In today’s world, folks want interaction and belonging. Without a sense of belonging, there cannot be a sense of loyalty.

Belonging is about identity, human connections, and a sense of welcome. Offering inclusion and equality statements does not automatically mean there will be a sense of belonging. Our members want to be engaged, but they’re not sure how.

Engagement can occur online or over the phone, but it is more than a glorified survey. Meaningful engagement must be rooted in quality, empathy, and curiosity. The biggest impacts can occur through one-on-one conversations.

We have to let go of what we think is the right way and let our community guide us to the solution. What members are seeking from the labour movement is what we need to discover and ultimately offer.

Henry Ford is credited with saying, “If I asked the people what they wanted, they would have said faster horses.” Therefore, it’s not only relevant to ask members about the labour movement as it currently exists, but how it could optimally exist to support them and their goals.

In 2014, the Canadian Labour Congress (CLC) launched the Fairness Works Campaign with television time and popsicle-heavy ads. It was reported at the CLC Convention that the ads test well with the general public. 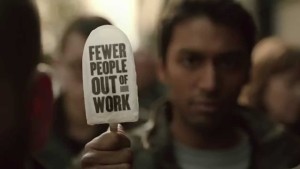 Our greatest ambassadors can be our own members. We have 3.3 million workers and 111 district labour councils operated through the Canadian Labour Congress. If even some of the money from the television popsicle ad campaign could be given to the labour councils to invest in grassroots member mobilization, education, and affiliation drives, our work could be done from the bottom up rather than the top-down.

A great benefit to this Fairness Works Ad campaign is that it plays a role in building public education and support of workers by showing how the labour movement supports everyone. This awareness helps to further the general population’s understanding of the labour movement, especially since only 31.5 per cent of working Canadians are unionized.

This ad campaign, paired with meaningful conversations with everyone – our own members, our bank tellers, our physiotherapists, our greater community everywhere – can make a difference and work toward further gains.

We are in the future now. We have the ability to ask great questions, find out what is important to our members, and shape a new labour movement. We can compose a new understanding and a social contract with our members and build capacity within while reaching out.

We need to make changes for our members in a rapidly changing world. We won’t be able to do everything that everyone asks for, but we can’t afford to ignore the conversation.