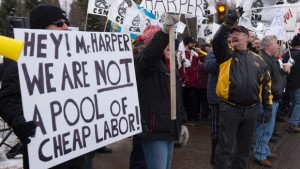 On September 11, Minister of Finance Joe Oliver announced a cut to small business Employment Insurance premiums. The 15% cut would affect businesses under 25 employees, or paying under $15,000/year in EI premiums. After the premium cut expires in 2017, the Tories plan an across-the-board cut to EI premiums for both employers and employees.

The federal government, and anti-union groups like the Canadian Federation of Independent Businesses, claim that job creation and economic growth are the real outcomes of this tax cut. Since the Tories and the CFIB are not friends of workers and have a habit of polishing turds for public consumption, let’s examine what these cuts really mean and how they fit into the bigger picture of the austerity agenda targeted at the working class.

The federal government’s 15% cut to small business Employment Insurance contributions amounts to, on average only $350. The high end is between $2000 and $3000 a year. This is not enough to create any new jobs. $350 is not even a week’s work at minimum wage.

But the CFIB says that with $550 million in savings, there will be 25,000 “additional person years” over the next two years. The CFIB hopes you’re not reading closely. They want you to think this means 25,000 new jobs (at only $22,000/year!). But obviously multiple companies, many of them competing against each other, are not going to pool their measly $350 savings to hire a single person. The reality is, these savings are too small to hire anyone. The savings will most likely go directly into small business owners’ pockets.

A step towards a wider attack

The cuts have instead opened the door for business elites to demand broader cuts to employer EI contributions. If you buy the lie that businesses will save enough to create jobs, you’ve fallen for the race-to-the-bottom logic of tax cuts. If small business gets a break, why not bigger business? They can actually create more jobs! The purpose of selling these as job-creating “tax cuts” is to create the illusion of momentum for wider attacks on EI. In fact, the Tories are already proposing deeper cuts in 2017 when this two-year credit is up.

Not a tax cut

Framed as job-creating tax cuts, the federal government and employers, big and small, are also saying EI is a tax. Don’t be fooled. Employment Insurance is not a tax whatever employers think of it. It is an insurance program designed to help unemployed and seasonal workers. Only when we assert it as an insurance program can we begin to make the argument that we need to improve and expand EI to all. We will have a hard time doing this in a society where “tax” is a dirty word.

Let’s also not forget that EI pays for parental leave for all Canadians, even if you don’t have a union. Modern parental leave was first won in 1966 in BC and then became part of EI in 1971. These changes happened at the last great wave of labour militancy in Canada. Parental leave continued to expand and improve in the wake of the 1981 Canadian Union of Postal Workers strike which famously won improved maternity leave, creating upward pressure on employers and governments for expanding benefits for mothers and fathers. When employers say EI is a burdensome “tax”, they are also saying they don’t want to pay for maternity and paternity leave.

The cuts to EI premiums are only possible because of a longer-term attack on eligibility. Whereas eligibility used to be above 80 percent in the early 1990s, eligibility is now at record lows: an average of 36.6 percent across the country. Eligibility drops down to the mid and low 20s in some cities, including Winnipeg, Toronto, Hamilton, Calgary and Regina. This isn’t just a problem of Tories in power. The first major gutting of EI eligibility came under the Chretien Liberals in 1996. This was the same year the Liberals caused Orwell to spin in his grave by changing the name of the program from Unemployment Insurance to Employment Insurance.

Ever since the Liberal cuts in 1996, billions in EI money has been collected but not spent on unemployed and seasonal workers. Over $50 billion in EI contributions has not been paid out since the 1990s. The federal government, under Chretien, Martin and now Harper, have all cycled this “EI surplus” into general government revenues.

Even if we accept that EI money should be cycled into general revenues, has that money been reinvested to improve the social safety net by expanding health, education and social transfers to the provinces? Has it been used to develop labour-intensive, job-creating green transit and energy infrastructure? Of course not.

EI and the Big Picture

The attacks on EI fit into the general picture of how successive Liberal and Tory governments in Canada are using divide-and-conquer to undermine programs paid by us all. They reduce access to a service, degrade its quality, claim the cuts are actually economically beneficial, and ultimately lay the foundation for wrecking the program entirely.

The slow death of the UI/EI program in this country has put unions and the broader working class on its back foot. It is much harder for unions to fight concessions, let alone fight for improvements, when workers are increasingly afraid of losing their jobs due to an eroded EI program.

Organized labour can only counter the assault on EI by arguing that EI should be for all and that the money we pay into EI should be for workers, not general government revenues. It took a titanic political struggle in the 1930s by organized workers to achieve Unemployment Insurance. It will require a political struggle to restore and improve EI and make it truly universal.