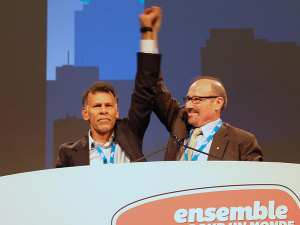 Stay tuned for RankandFile.ca’s analysis of the whole CLC convention next week.

The CLC convention, the largest in its history,  is over and the house of labour has a new president. On Thursday afternoon the delegates from the CLC convention elected Hassan Yussuff as their new President. Yussuff won by a slim majority: 2318 votes to Ken Georgetti’s 2278. There were 29 spoiled ballots.

The actual election was a little ugly as both sides bussed in delegates just for the vote. Two new whole rooms were opened up and over a 1500 new delegates flooded the floor. The last full day was dominated by the election, even though it was only scheduled for a half hour. After the presidential vote but before the winner was announced, delegates went on a march against austerity. The march was a nice break but there was certainly a fair amount of tension and nerves in the air.

When the vote was announced there was a split second of silence before half of the room erupted with chants of “Yussuff! Yussuff! Yussuff!” It was the first time an incumbent CLC presidential candidate was defeated. Yussuff is also the first person of colour to head the CLC. This and his immigrant roots are a big symbolic shift for the labour movement.

A Modest Shakeup
Yussuff’s acceptance speech targeted the Harper and the Conservative Party, saying the CLC needs to take the fight to them. During his closing remarks at the CLC convention Yussuff words were even stronger saying that he will “see us on the picket line, at the occupations, and possibly even at a general strike.”

This is a welcome change of rhetoric from the top. However, it is incorrect to think that this rhetorical shift will somehow create great change in the labour movement. It was an important victory to get rid of Georgetti, whose conservative tendencies have reinforced the right-wing in the labour movement. But to describe the officer elections at the CLC, which amounted to a  reshuffling of positions, as change does not reflect the facts (the exception being the election Lafleur, which was an important victory for those who want to see a national fightback strategy against the cuts at Canada Post). Unifor now has its man in the driver seat and we shall see what he can do.

The Husseini campaign opened up this space for the left at the CLC level and without his candidacy none of this modest shakeup would have happened.

The Husseini campaign opened up this space for the left at the CLC level and without his candidacy none of this modest shakeup would have happened. His tactical withdrawal put momentum into Yussuff’s campaign and surely helped sway some fence sitters in the Georgetti camp to vote against their candidate. From several sources we have learned that the bulk of dissident Georgetti voters came from NUPGE, specifically the OPSEU (Ontario) and SGEU (Saskatchewan) camps. The Husseini campaign, despite disagreement, was not majorly fractured coming out of the convention.

After Convention
But we must keep in mind that the CLC is currently not a place were effective change can be enacted. This is precisely because the CLC itself is weak. It is the big national affiliates that have the power. This means the struggle to make the labour movement a fighting force has to begin at the local level that aims to push the affiliates to adopt more militant and progressive positions on the ground.

This doesn’t mean the Husseini campaign and the Yussuff victory were meaningless. The Husseini campaign allowed progressive trade unionists to connect from across the country and created an opening for building a cross country network. Will this happen? It is an open question and totally dependent upon those involved in the campaign and how they confront the strategic and tactical questions before them: what should we build exactly, for what purpose, who will it involve and how should it go about doing it? The one firm idea coming out of the last caucus is that Take Back the CLC campaign will organize some sort of forum or gathering at the People’s Social Forum in Ottawa at the end of August.

As for the meaning of Yussuff’s victory, it wasn’t nothing and it wasn’t everything. Yussuff was pushed by the Husseini camp and by his own supporters to talk more about mobilization and grassroots organizing. This will make it easier to critique the Together Fairness Works campaign when it inevitably fails to deliver the goods. We have a new President of the CLC and that is good, but the work we have to do remains the same.