It’s a tale of corporate extortion and government negligence that has become all too familiar.

For the past six months, OmniTRAX — one of the largest private rail companies in North America — has been holding the tiny northern Manitoba town of Churchill hostage after unprecedented flooding damaged much of the company’s Hudson Bay Railway. The town of 800 depends almost entirely on the rail line for food, fuel and tourists. The line is also especially vulnerable to climate change because of its permafrost base. 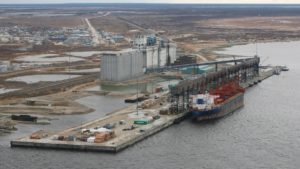 But the Denver-based OmniTRAX, which has received tens of millions in subsidies from the province and federal government over the years, has refused to pay for repairs and demanded that governments cover the costs.

Now the federal government is suing OmniTRAX. The company has in turn threatened a NAFTA claim against the government due to its privatization of the Canadian Wheat Board in 2012 which had used the Port of Churchill and sustained it. The port is also owned by OmniTRAX. Yet, OmniTRAX Canada’s CEO Merv Tweed voted for the Wheat Board privatization as a Conservative MP!

Meanwhile, Fairfax Financial Holdings — a massive holdings company — has announced interest in buying up the remains.

But as reported by the Financial Post in an exhaustive summary of the situation, the company only spent $14 million over ten years, or a tiny $1.4 million per year. Then, in 2008, OmniTRAX pressured the federal and provincial government to hand over $20 million each over the course of a decade, with the expectation that the company would contribute the same – in addition to its regular annual maintenance costs.

In mid-2016, the port was permanently closed by the company, resulting in layoffs of 80 workers: some 10 per cent of the town’s population.

Then came the flooding.

Two sizeable blizzards in March 2017 resulted in a huge melt and water level rise in late May. That damaged at least five rail bridges and washed away the track bed in 19 spots. It was announced that some 600 culverts would need to be inspected for structural integrity.

OmniTRAX immediately halted rail service. The price of food and fuel lurched upwards, with necessities being delivered by airplanes at five times the price. Broccoli heads were being sold for close to $9. Residents in Nunavut who shipped a lot of food through Churchill also suffered.

The economically-essential tourism season, expected to be even bigger than usual due to VIA Rail’s Canada 150 Youth Pass during the month of July, was effectively cancelled.

But questions were soon raised about the actual extent of the rail line’s damage. In June, a pair of motorcyclists rode up the entire track, recording only 14 washouts between Gillam and Churchill.

At the time, Churchill mayor Mike Spence told CBC News: “There is no water covering the tracks in any place and reports are that there has not been for some time now. It has been almost three weeks now. Certainly there is some damage but the photos and reports provided speak to the need to have workers on the ground beginning repairs now.”

But the weeks became months.

OmniTRAX suggested that repairs would cost between $20 million and $60 million, and take until the end of October. The only consistently critical voice in the federal political sphere was then-NDP leadership candidate Niki Ashton, who represented Churchill as part of her riding and called for immediate federal nationalization of the railway and port.

Now, the company is trying to break its contract via a “force majeure” clause so it doesn’t have to pay $20 million on tracks and pin the blame on governments.

OmniTRAX CEO Merv Tweed even had the audacity to state: “It appears from their collective indecisiveness, dysfunction and lack of leadership on this critical issue that both Canada and the Province of Manitoba are content to leave Churchill as a remote, fly-in community for the first time in over 100 years.”

For too long nationalization has been largely abandoned in Canadian politics, but there is strong evidence it can gain major support if it is part of a real campaign. In the United Kingdom, the Labour Party under Jeremy Corbyn has called for the public ownership of railways and other critical infrastructure. After more than two decades of failed rail privatization, the demand is hugely popular.

Niki Ashton should be commended for her commitment to raising awareness about the situation and pushing for nationalization of the port and railway in Churchill. But it hasn’t been echoed by provincial or federal NDP politicians. Newly-elected federal NDP leader Jagmeet Singh hasn’t tweeted about Churchill, while Manitoba NDP leader Wab Kinew has only mentioned the situation twice on Twitter. The response from organized labour in Manitoba has been fairly weak.

Taking the line and port out of private hands would be a means to reopen critical access to Churchill and surrounding areas and begin long-term planning around maintaining and upgrading infrastructure especially with climate change challenges.

The demand of nationalization also turns the tables on the OmniTRAX, the Pallister PCs and the Trudeau Liberals. Until now, the necessity and opportunity of the crisis has been squandered.