In the wake of a contract dispute unresolved by conciliation and bargaining, 61 workers at the Halifax-based Chronicle-Herald newspaper walked off the job late last Friday, mandated by an overwhelming 98.3 per cent in favour of strike vote.

In negotiations prior, management was adamant in its position of a 17 per cent wage cut, a staffing reduction of 30 per cent, and removal of gender parity in the hiring process. In an open letter to the Herald published Saturday, January 16th, CEO Mark Lever said that the current contract was “unsustainable” due to the financial realities of the paper.

The Halifax Typographical Union (HTU) attempted to curb the heavy restructuring by offering concessions, including a five per cent wage cuts across the board with a corresponding wage freeze, caps on severance and a 25 per cent reduction in starting salaries for new reporters and photographers, which management rejected.

On Monday, another round of negotiations fell apart.

Martin O’Hanlon, president of the HTU’s parent union, the Communication Workers of America Canada (CWA) says that the company, plain and simply, “hasn’t been playing fair ball,” in a phone interview on Monday.

Despite the “reasonable concessions” offered by the union, O’Hanlon says, the company has still pushed for severe cuts. Before Monday’s bargaining session, he said a rejection of the union’s fair concessions should be taken as union busting.

The Herald – which is the largest independent daily in the country – has had a recent history of restructuring and conflict, including a lockout of 13 unionized workers in February 2015 and letting go of 17 journalists in December 2014 through early retirement and layoffs.

On Thursday, management filed a 48-hour lockout notice, and a strike vote was taken among the workers in response. A work stoppage – whether it be a lockout or a strike – seemed inevitable. At the deadline of Saturday at 12:01 a.m., workers rejected the draconian contract put forth by management and began their first day of striking.

Tensions heightened quickly on Saturday morning when 17 of the strikers were given layoff notices – a move management later suspended. But despite this initial shock, solidarity has been abundant online – especially on Twitter where the HTU is actively engaging with supporters – and on the actual picket line throughout Halifax, Sydney and Cape Breton.

One striker, Tim Krochak, said that his two children missed the first half hour of school on Monday so they could see the support on the picket line. “The mood is very good – [it’s a] hard time, but we want to preserve our contract and we are holding out.”

“While it was cold today, everyone on the line is committed to what we’re doing and we’re thankful for the support we saw today from the community, both in terms of people who stopped by and the response we’re getting online,” said Michael Gorman, a staff reporter who covers provincial politics, on Saturday.

Gorman, in lieu of work at the paper, is covering Nova Scotia politics on his Twitter. Another reporter, Remo Zaccagna – who live-Tweeted Tuesday’s Halifax municipal council meeting – is also continuing his reporting.

O’Hanlon and the CWA encourage messages of support, donations to prop up workers dependent on strike pay, and emailing the Herald to denounce the “aggressiveness” management has brought to the bargaining table. The Herald’s success is due to the hard work on the part of its employees, he says, and he stresses that expressing support for those workers will be much appreciated.

In the provincial legislature, the Nova Scotia New Democratic Party (NSNDP) is “not accepting media requests from the Chronicle Herald while its unionized workers are on strike,” the party said in a press release on Saturday.

Strikers have been met by members of both the Halifax-Dartmouth and Cape Breton Labour Councils on the picket line.

Broader solidarity has been expressed from larger organizations, including the Nova Scotia Federation of Labour and Unifor. Lana Payne, Atlantic Regional Director at Unifor, called on members of Atlantic-based locals to stand in solidarity with the workers by cancelling “any subscriptions to the newspaper until the dispute is settled,” as well as rejecting media interviews from replacement workers and not writing letters to the editor.

The call extended to the Unifor-based Canadian Freelancers Union. Member and organizer Rebecca Rose commented, “As freelancers, we know how difficult it is to turn down paid work and that it’s not something that everyone can do. […] If you do have the means, we encourage you to consider the above and stand in solidarity with the unionized workers at the Chronicle Herald.”

To discourage scabbing, the Halifax Media Co-op is offering non-HTU columnists for the Herald the opportunity to temporarily have their weekly columns featured for $125/piece.

Scabbing in the newsroom

Plans were made predating the work stoppage to hire scab labour, including freelance journalists and recent graduates of the nearby King’s College, as reported by the CBC. “A late November email from Herald management, provided to CBC News by one of the freelancers, asks if the journalist would be interested in “freelancing more regularly” for the weeklies or “writing for the daily.”

Moreover, the Herald announced that it would be removing bylines from published stories, allowing these scabs to work anonymously. 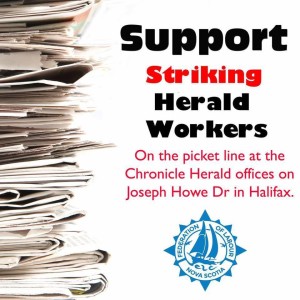 In another open letter published by the Herald, Lever said that “the internet has had a huge impact on our current circumstances. To remain viable, we must take steps to protect the future of our business.”

The Herald’s shrinking budget due to structural change in the industry is, of course, common among North American dailies, and salaried journalists are bearing the brunt of this reality in the form of reduced work available.

These cutbacks are also felt in the newsroom by those reporters who have managed to keep their jobs.
“After the last round of layoffs at the end of 2014, I immediately noticed a difference in the kind of work we were able to do,” says Chronicle-Herald staff reporter Frances Willick. “Since we were left with fewer reporters on the ground, we were so busy just covering the daily stories that it became much harder to make time for the kinds of stories that many of us thrive on – the investigative pieces that take weeks or months to develop and the finely crafted narrative pieces that help reflect our province.”

For freelancers, the strike may be seen as an opportunity for work. But critics say that the opportunity to take contract work as a scab – however beneficial in the short-term – is harmful in the long-term.

“A short-term influx of work for freelancers during a lockout, will not benefit any of us in the long-term,” says Leslie Dyson, president of the Canadian Freelancers Union (CFU). “Crossing the picket line, and helping management to keep the paper running smoothly during a lockout, will undercut the Typographical Union’s ability to negotiate a fair contract. Conditions will only get better for communication workers—union and non-union—if we remain united and support each other.”

Striking reporter Tom Ayers says, in regards to young journalists being tempted by scab contracts through the Herald, “gaining experience in a business means building trust with your sources, readers and bosses. If you’re willing to take money from a company that is not treating its employees fairly, what does that say about your principles and ability to be trusted?”

Ayers says that journalists everywhere know “our world has changed,” and suggests that management work with employees and the union to strategize a “sustainable business model, as long as it include[s] principled journalism.”

“Instead of attacking the union, owners and managers at the Herald should find a way to bring employees into a tent and discuss ways to change and adapt,” he says. “Negotiation is necessary in a unionized shop, and it’s also likely to produce positive results.”

The conflict at the Herald comes right in the center of recent restructurings across the country, with the closing Guelph Mercury and most shockingly the cut of 90 Postmedia jobs. Central concerns of these events pertain to the loss of jobs, but also the problem of greater media concentration and the centrality of journalism to democracy.

“Journalism plays a key role in society in that it holds people, governments and institutions accountable for their actions,” says HTU Vice-President Frank Campbell. “A journalist plays the role of advocate for citizens who want to be treated fairly by other individuals, business, government and society.”

The outcome of the Chronicle-Herald strike could have major implications on the future of sustainable journalism in Canada that is not corporate dominated. Its consequences will be felt from coast-to-coast.

“My fear is that if the company’s contract demands are met, the quality of journalism at the Herald will suffer. And if it does, that’s a shame. It means there are fewer watchdogs keeping track of those in power, it means less scrutiny, analysis and criticism of decisions that affect people, and it means that some important stories won’t be told,” says Willick.

Correction: An earlier version of this article said that Michael Gorman was a photographer. He is in fact a reporter who covers provincial politics.